"I was hopeless but now I’m hopeful, was downcast but now I’m lifted. God bless you all." Bernard Gitonga 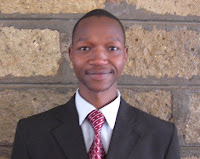 The following is a letter from Meru. It is such an honor and very humbling to be able to share Bernard's story. I am touched that he has decided to share it with us.
Blessings, Karen

THANKS HOPE INTERNATIONAL AND CHERISH MINISTRY

Every child is born with a purpose, a gift, talent and dreams to make this world a better place for all. At a tender age, each one of them has a hope of becoming somebody in the later future: That's why they always declare their aspirations by saying,' when I grow up, I would like to be a Doctor, Pilot, Teacher and many more.

At this age, the children barely understand the environment and conditions in which these aspirations become a reality. Poverty, HIV/AIDS and domestics conflicts are some of the thorns which squeeze the dreams, choking hope until all seems like building castles in the air. I strongly believe that every individual has ability to achieve anything in this world if given an opportunity and relevant support.

I was a very hard working student in primary school, always topping and carrying awards home to my parents. They were so proud of me. My dream was to become a doctor and be of good help to my family and community. I was born in extreme poverty where we could miss meals often.Dad always patched up our school shorts because there was no money to purchase new ones. I rarely wore shoes to school and chiggers could have easy  access to my toes. I always developed septic ulcers on my feet which kept me out of school and disrupted my concentration. This used to bother me a lot but I was determined to make it. I performed well in my Std 8 exams with 533 marks and was called to Meru School though I was hoping to join Starehe Boys Centre so as to spare my parent from paying fees.

My parents didn't have enough money to pay fees, buy books and do shopping during my reporting date. The school declined to admit me without the full school fees though Josphine M. and Harun K. had donated books and other requirements. May God bless them. Josephine accommodated me in her house at Kaaga for one week as my dad had gone home to beg for the remaining amount from well wishers. My mum and dad became a laughing stalk in the village and relatives during this period. May God bless them. I used to cry every night asking God to see me through.The following week, Dad came and I reported to school even though without shoppimg which he promised to bring later.

My secondary school life is one that I don't miss. I rarely had pocket money and others always mocked me as they were having their pieces of loaf which I could not afford. Those who sympathized used to share their bread with me. School fees were hard to pay for my parents. Sometimes I was sent home for more than two weeks bearing in mind that the exam is indiscriminate. This trend of going home was too much and unbearable. The policy was: No Fees, No Food! We used to have Meal cards to control the feeding from dining hall. I decided not to go home when chased from school, but survive by all means. The students used to call me 'Vulture' because I always waited until they were done with eating and the left-overs was my share. Hence we were no better than scavengers.This was so intense in my fourth year. I was dying from distress but, I was determined to excel.

My dad had conducted 2 fund raisings during this period. The first raised Ksh20,000 (about $230) and the second Ksh25,000 (about $288.) This was in the 1st and 2nd year. Dad gave up the fund raisings and decided to hustle his way through. During this period they were severely wasted because they were hardly eating. They always saved meals for my younger brother and sister. In the year 2002, I did my exams and passed well even though not as expected. This shattered my dreams of becoming a doctor.

I was not willing to go back to form 4 for a better grade because I really didn’t miss that life and even if I did, my parents could not afford to pay as they still had fee in arrears to clear from the school. I left to Nanyuki where I did several casual jobs which were paying peanuts. I didn’t expect my parents to take me to any college because of the extreme poverty. I worked hard to learn accounting as this was what I was able to do for myself. It was not until 2006, when I met Josephine after a long time. She asked me what I would like to do in case someone promised to assist. I said, 'Nursing'. She asked me to hold on. She linked me to my sponsor and friend, Clare D. of Hope International who was able to finance my nursing education at Maua Methodist Hospital for 3yrs and 6 months. I didn’t lack anything and my college life was stress-free. She supported me spiritually, emotionally and inspired me to reach my highest potential. God bless her.

I completed my training successfully on March this  year graduating with a Credit. I was absorbed to work with the hospital even before my exam results. I’m working in the Operating Room. The hospital has taken me for 2wks training on eye surgery at Lions Sightfirst Hospital in Nairobi. I now have hope of doing even much more in my career and others. I will receive my Nursing degree as God will make this possible.

Thanks a lot to Hope International & Cherish ministry of UPPC Church for the difference they have caused in my life. I was hopeless but now I’m hopeful, was downcast but now I’m lifted God bless you all.