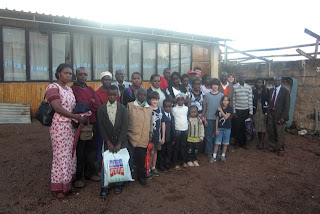 I want to get the memories of my trip to Meru down on paper before I forget some of the details which I know you will want to hear. I’ve been hampered in doing so, as I’m trying to catch up on my Hebrew studies; they covered “past tense” while I was gone, so it feels like I missed a month. We’re also moving into our permanent house on Tuesday, which means I’ve been re-packing suitcases. This will be rough, but hopefully thorough.

We arrived in Kenya on Dec 27th at about noon and our driver, Joseph Boit, took us to the Panafric Hotel in Nairobi. Joseph is from the Kalenjin tribe, which produces the amazing distance runners. He walks with a limp, due to a badly set broken leg, suffered while playing soccer as a young man. It makes you realize what a difference adequate medical care can make in a person’s life. After a brief rest, we headed to the animal orphanage & then ate dinner back at the hotel, going to bed completely exhausted. We drove to Meru the next morning, arriving at about 1330. Juster, Josephine’s sister, had told Rev Elijah to expect us at about 1300. A group had assembled at 1230 and was waiting for us in the hotel restaurant when we arrived at the Blue Tower. The Reverend insisted that we go to our room to freshen up, so Dan quickly changed into nicer clothes and we went right back down. They had all dressed in their best clothes to meet us and our children had on shorts & t-shirts. We had asked them to be our guests for lunch and suggested they order while we went upstairs. 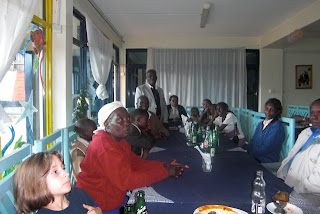 The table was very long and our sponsored child, Douglas was at one end. We were at the other end, so we asked him to move down to where we could speak with him. We ordered our lunches and waited for the food to arrive. During that time, we tried to speak with as many of the people around us as possible, though most were too far from us for that to be possible. Some of those closer to us spoke Meru and Swahili, but not much English. Just to get around and talk with everyone while we were finishing our food, I went around the table and wrote all of the children’s names out in Hebrew on slips of paper (I was also hoping this would help me remember all of them).The people in attendance were:

-Tony, sponsored by Bill and Sally Barrett, with his grandfather

-Beautiful sisters named Judy and Beatrice (I think) who are sponsored by Abigail (the Rev didn’t have his files, but he thought that was the sponsor) 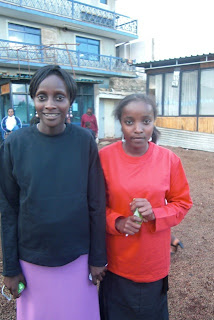 -Our Douglas, with his grandfather and aunt

-Josephine’s brother and family arrived a bit later, so they were at a nearby table

When I asked about school, Rufus told me he likes engineering; Jamlick made a face when I asked him if he liked math – he said he likes driving. I think they might have taken me to mean what career they might like. Tony, who just graduated, said he’s interested in business and marketing. Rufus and Jamlick both have health concerns, but they looked good, if small for their ages.

After we were done eating, the Reverend began the speeches. He told us they were so impressed that we would choose to celebrate my 40th birthday there and that it was a great honor to them and to Kenya. I was humbled by his comments and wanted to interrupt to tell him that I’m really no prize. Dan spoke about how the items that we brought represented the love and concern of the supporters in Washington, as well as our 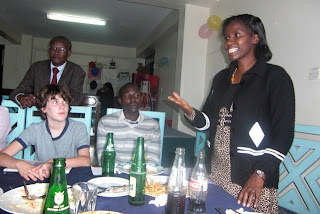 congregation in Israel. Esther spoke about the need for the sponsored children to make the most of the chances they had been given and to help others. Some of the guardians spoke, as did Ibrahim. We were chided several times for not staying longer and were told that on our “next visit” they would introduce us to their local food. Our driver Joseph (who was referred to as “the pilot”) spoke briefly in Swahili, so I don’t know what he said. He’s a Christian and a wonderful man, so I’m sure it was from the heart. When the Reverend opened it to the children, Tony got up and talked in a poised way of his gratitude for the program and his sponsors’ (Bill & Sally) enabling him to finish high school. Like Douglas, he just graduated and is waiting until Fe 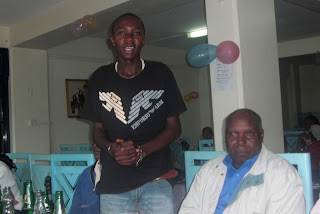 bruary for his exam results. The Reverend pressed me to say something, so I told them how touched we were that they would come out to see us, knowing that they had walked on muddy back roads to get out to a paved road to catch a ride. I also let them know that they are thought about and prayed for by people in the US and Israel. Each speech was translated roughly into English or Meru and applauded, so the process took a little while. The Kenyan children sat through it with a lot more patience than my kids.

After lunch, we went to our van, which had 3 huge duffel bags full of donations. When a staff member at the school heard 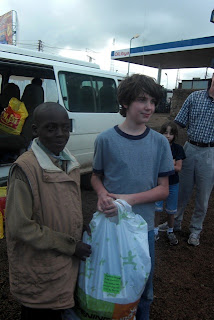 that we were taking items to Kenya, the school donated all of the lost & found items from last year, which was about 40 sweatshirts, plus a few jackets and sweaters. UPPC Cherish sent money for us to buy 40 new sweatshirts, and a woman from our congregation here donated money for another 20. We also received gently used items from friends here, so there were about 120 warm tops, a bag of toddler clothes, and a few ladies clothes that were donated at the last minute (and since we had room, we took them). Jamlick and Rufus had care packages from their sponsors, as well as another boy who was not there (but his package is marked with his name and was left with the Cherish team). The other children there had been told before we came that only certain kids would be getting packages, so I hope that it was a pleasant surprise that they each got a new sweatshirt. We were able to have them try on different sizes and, when possible, select a color. We also had taken a bag of hand-crank flashlights, which don’t need batteries, and there were enough for each child. The kids ran around and played while we distributed items, then we took some group photos. At that point, the guardians and sponsored children began their long treks home.

We drove over to the Cherish office, to deliver the rest of the items there. Esther pointed out her school and the Meru School, where Josephine taught, along the way. They said that they were going to have a m 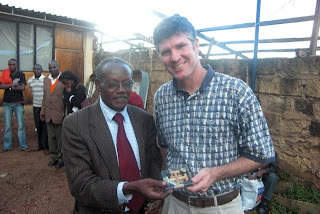 eeting on Jan 2nd, so should be able to sort and distribute more of the items then. We stayed for a while, discussing with them their ideas for the ministry, such as a center for taking care of some of the sicker children, who might not be cared for properly by their guardians. After many more hugs and admonishments for not staying longer, we headed back to the hotel for the evening. The next morning, Rev Elijah surprised us by showing up during breakfast, to ensure we were well. We talked with him more about the ministry and Kenya, in general. After more goodbyes, we headed back to Nairobi. I ate something at the Blue Tower that made me ill for a few days, but God is good and I made it to Nairobi with no major problems.

We met Juster and her boys at the Carnivore restaurant that night and really enjoyed getting to visit with them. After spending that night at the Panafric, we headed out on safari on Dec 30th. The trip to the Masai Mara was fascinating and we were able to visit one of the Masai villages to learn more about their culture. Due to the drought, they have lost about half their cattle. They told us we were good luck, as it began to sprinkle during our visit. They welcome visitors, as tourists pay a pretty hefty “donation” for the tour, which helps them to make ends meet. I was impressed to hear that they share the money from the tours and the handicrafts they sell, even with other Masai villages in the area, using the money to send all interested students through secondary school. One of the primary schools in the area is named for President Obama.

For us, it was a wonderful trip. The people, scenery, and safari were just amazing; we were humbled by how gracious the folks in Meru were. It was also neat to see Christmas decorations, as there are hardly any in Israel. The results of the national primary school exit exams, for those completing 8th grade, were released while we were there. I loved seeing the front page of the papers carry the pictures of the top boy and girl, along with the lists of the top 10 students in each district. On the TV news you could see the joyous celebrations at the schools and in the villages of the top students across the country; that’s extra-impressive when you consider this was over the holiday break. How wonderful it would be to see honor students getting carried around on people’s shoulders during a pep rally in our towns!

I think I have about covered things, perhaps in too much detail at times. I will send the pictures as attachments to other e-mails, as they will need to be sent from a different computer. I’ll attach the text of this e-mail as a document, just in case someone would like it in that format. I’m sorry that I might not have the exact names of all the children and their sponsors. Thanks to those of you on that end for giving us the privilege of taking gifts from you, in the name of Jesus.